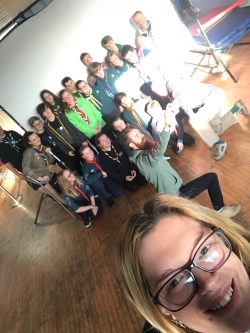 District Youth Commissioner, Hannah Deakin, “it’s a great demonstration of the District Team’s and Executive’s active commitment and support for You Shaped Scouting in the District to hold the Youth Forum as part of the 2018 National Your Shaped month”.  The Forum workshop day took place at the District Scout Centre on the 24th February. 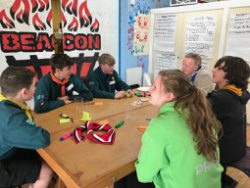 Jeff Shaw, District Executive Chairman, welcomed the Scout Troop and Explorer Unit Representatives stating “The District Youth forum have an important voice in helping the District Executive to decide on the priorities  for investing in District Facilities and how they should be improved to meet the expectations of our current and future Youth Members”.

Colin Chambers, District Deputy Commissioner, stated “This relaunch of our Youth Forum in its new format and composition has produced a greater wider representation of Troops and Explorer Units across the District compared to the old format.  We had a great spread of ages participating, from Scouts as young as 11 through to Explorers just about to move onto to Network at 18 years old. We also had over 50% of the District represented and there was an awesome level of participation from our Scouts and explorers over the whole day, I feel the workshop was a great success not just on the level of representation but also the sheer number of ideas that were put forward by them.”

Over the course of the day, all the Youth members took part in discussions sessions on:

Hannah was overwhelmed by the response ” its give me a great platform going forward, I have lots of youth members here today asking if I can come to their Troops and Units to run “You Shaped in a box” night and or supporting even greater You Shaped Scouting with their Troops and units”. 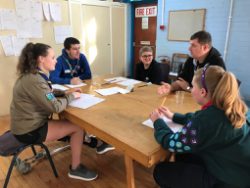 Richard Hamilton, leading organiser for 2019 District Camp, told us “I now have a wealth of tremendous ideas from today on what our Youth Members would like to see as activities at the District Camp, they clearly want new adventurous experiences which reflect the higher expectations of their age group these days.  There were also some of the more regular favourites.”

Oliver Chambers who takes over the District Commissioner role at the end of  March, took the opportunity to participate by running a workshop, 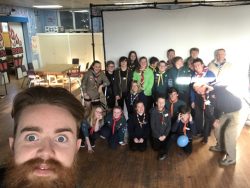 encouraging participation throughout the day and getting hands-on in a number of the games. “I’m really excited by many of their ideas and comments from today. I’m  inspired by the depth and quality of the discussions which took place and just how much thought they put into their ideas.”

All the feedback from the forum is being collated and analysed after which the District Youth Commissioner will present it to the District Executive so that it can be taken into account in their decisions.
Hannah will be making contact with the Leaders of those Troops and Units whose representatives asked for her to attend and run “You Shaped night in a box”.
The next Youth Forum is planned for September/October 2018, the format will be a weekend event involving a night way so that those participating having the opportunity to socialise, get to know on another and also here about what is going on in the other Troops and Units in the District”